I just got back from Haiti. And I’m starting to process everything I experienced. It’s re-entry and I don’t want to forget what I learned, what I saw, what I felt while I was there. This wasn’t my first “mission trip”. I went to Costa Rica with my daughter during her senior year of college. We worked in medical clinics that were set up for the underserved and the poor immigrants. It was a great experience and I saw and learned a lot and while it opened my eyes, it did not impact me as deeply as this trip. My last few days in Costa Rica were spent exploring beautiful volcanos and waterfalls. I left as a tourist. When I left Haiti, I left with conflicted emotions. Hope and Sadness. I loved parts of the experience and yet I was ready to come home. It was a lot to take in.

My last day in Haiti started at 5am with a wild ride to the Port a Prince airport, down a winding mountain in an open air truck with 12 ladies and all of our luggage holding on for dear life. We felt alive and free and a little reckless. This was our last ride in the truck that had been our mode of transportation to and from the orphanage where we were volunteering and it had become a bonding experience for all of us. 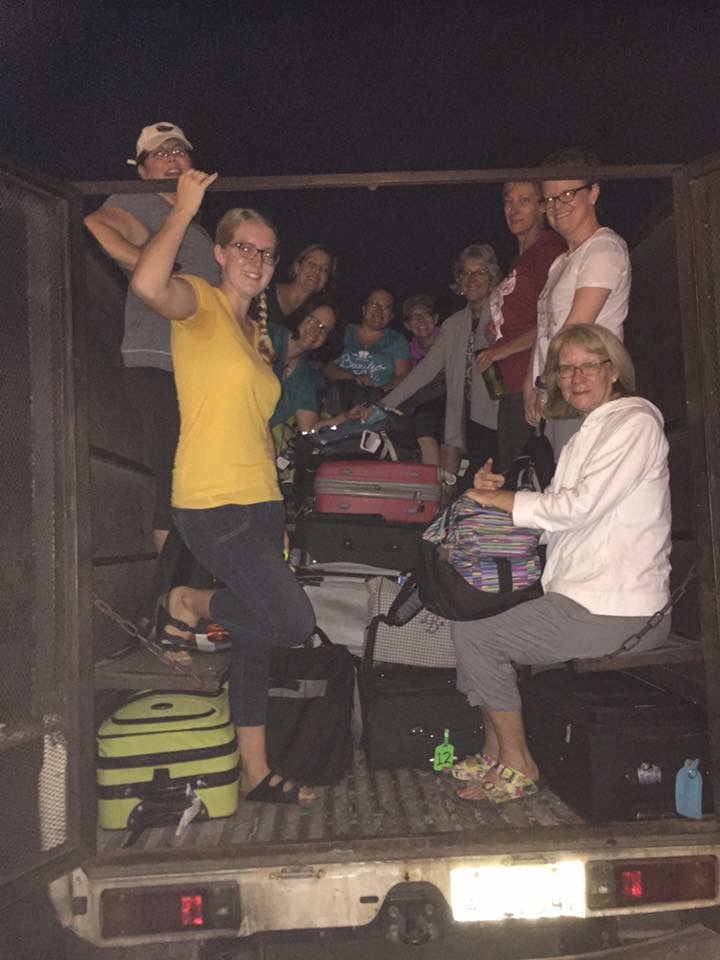 But let’s back up 8 days and start from the beginning. How did I end up in Haiti? I thank Karyl for that. As the “leader” of the group (which she calls “Soul Journey”), Karyl organizes an annual trip to Haiti for a group of 12 or so women that she hand selects (for reasons known only to her) These women vary in age, career, marriage status, parenting status and just about everything else. This years group included a mayor, a podiatrist, a nurse, a speech pathologist, a therapist, two lawyers (one was also the mayor), a banker, a photographer, a master gardener, several moms and career women (these categories overlap). I suppose I fall into the mom, career woman and yoga instructor slots. But the really important descriptive labels for these women are more like; authentic, caring, giving, open, joyous, nurturing, hopeful, risk-taking, honest and trustworthy. Oh, and also at times extremely inappropriate and hilarious. That came in handy as we overcame many physical and emotional challenges. These women will forever be in my heart. Sometimes it takes seeing things together to truly see each other. 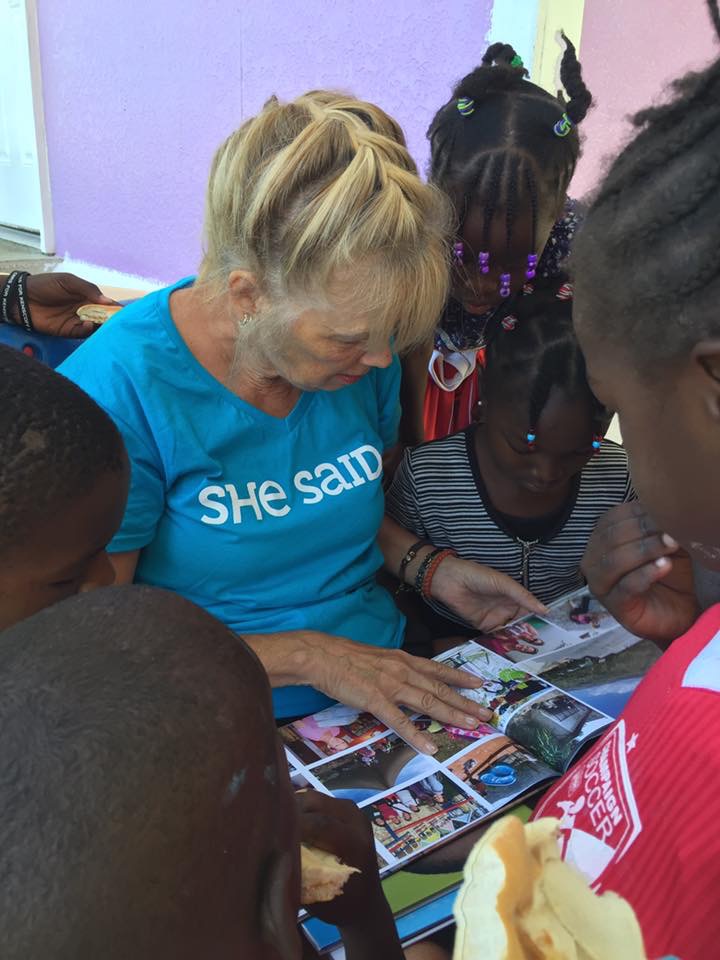 We were “somewhat” prepared for what we would be seeing and doing while in Haiti but were told to “Keep an open mind and willingness to do whatever is needed.” We hit the ground running our first day after an early flight from Miami. After being shuttled from the airport to our accommodations (a guest house for the GLA orphanage volunteers) we went immediately to the main house where newborns and infants up to about 2 years old are housed (and very well loved and fed which made me happy). We cuddled those beautiful Haitian babies until late in the afternoon. We fell in love with those babies as well as the older children over and over during our stay. Finally, exhausted from our day of travel and baby wrangling, we returned to the guest house for a traditional Haitian meal (we ate a lot of rice and beans but also fresh mangoes, avocados, pineapple, beef, chicken, spaghetti with hot dogs (!!) and traditional breakfasts).

We were well fed but also cognizant of the lack of certain types of food (we all craved salad and made that our first meal at the TGI Fridays Miami Airport location). Since the water is unfiltered, we constantly carried water bottles with us and were careful not to use tap water to brush our teeth. We took very short “military style” showers to conserve water. Water in Haiti is very expensive – something we take for granted in the United States. We also take for granted air conditioning. 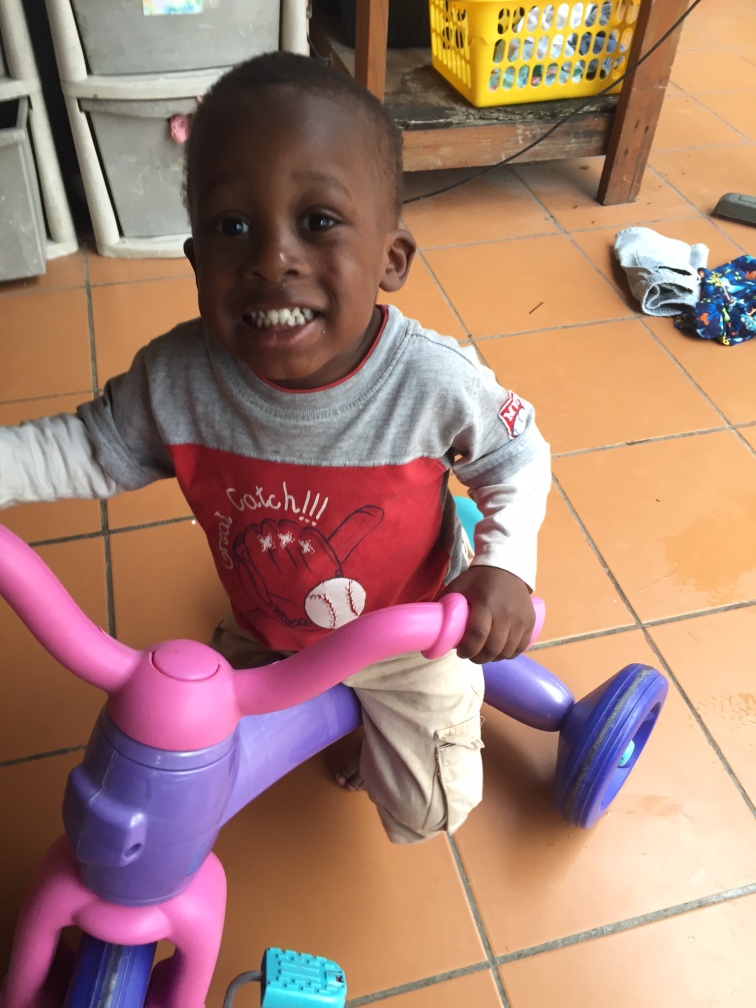 Fortunately, we were far enough up in the mountain where it was slightly cooler and got used to the lack of AC, as well as the nightly serenades of roosters, tree frogs (!) and barking/howling dogs. Although we were in a relatively “safe” neighborhood, our temporary home was surrounded by tall walls with razor wire and broken glass bottles to deter (who?) from getting in. In fact, at the orphanage where the older children are housed, there are armed guards with rifles walking around. We quickly got used to this along with other Haitian facts of life (little infrastructure, trash lining the streets, emaciated dogs roaming wild, women with huge baskets of wares balanced on their heads, huge potholes, intermittent electricity and seemingly no traffic laws).

As promised, our mission and activities were varied. We had collected household items (along with diapers, toys, formula and medical supplies) to outfit the two guest cottages being built at the orphanage and while we were hoping to be able to “accessorize” the cottages with the colorful bedding, towels and kitchen accessories, the houses were not yet ready and we were recruited to sand drywall, grout tile and paint! New skills for many of us and the level of willingness to roll up the sleeves, get splattered with paint, and covered with drywall dust was impressive! We went through a lot of body wipes and wet ones over the week. We also had a lot of laughs and what I call mission moments.

And here it is.

As I mentioned earlier, the orphanage we volunteered at (Gods Littlest Angels – or GLA for short) is an amazing place. Run by a couple from Monticello, Illinois with a staff of Haitian nannies and cooks as well as additional volunteers and missionaries, GLA is what you might call the Disneyland of Haitian orphanages. While that may sound like I am trying to sugarcoat things, having heard descriptions of other Haitian orphanages, it is clear that these children are the lucky ones. They live in individual cottages with two nannies for every 10 or so kids. They have a modern playground. They are well fed and attend school, learning in English and Creole. They are all going to eventually live with their “forever families” – although the adoption process can take years. All will eventually be adopted.. all except the Kenscoff ten.

Here’s where my heart was touched and touched deeply. Because there are bad, horrific orphanages where children are abused, neglected and worse. And we met some of these children. About three years ago, a horrific orphanage in Kenscoff, Haiti was reported so many times that the government finally shut it down and several of the children needed to be placed at other orphanages. GLA got a call and was asked to take a “few” of them. They ended up bringing 23 children. After searching for living relatives (In Haiti, orphans are often dropped off by parents who cannot afford to feed them), 13 were placed in Haitian homes. The remaining children (now called the Kenscoff 10) remained at GLA. Because they do not have any paperwork, they cannot be adopted. They cannot have “forever homes.”

But there’s a happy ending to this story (or beginning actually). An amazing young women (and that adjective isn’t even strong enough) who has been with GLA since the age of 18 (and is now 32) is going to (get this) take those ten kids (ranging from ages 7 to 13) and move them into a new home where she will be their guardian or “mom” and raise them up to be adult citizens, educated and loved. And here’s where my heart was touched by one of those ten children.

On the third or fourth day working as sub-contractors (if you could call it that), we asked if we could venture outside of the walls of the orphanage and explore the beautiful scenery (remember, we are up in the mountains, away from the slums, the heat and the garbage that lines the streets of the city). The orphanage directors (another “amazing” young couple who sold everything, picked up and moved their family to Haiti) surprised us by announcing that we’d be going to a walk with the Kenscoff kids to see their new house! As we were waiting to leave, the kids came running up to us with huge smiles on their faces. 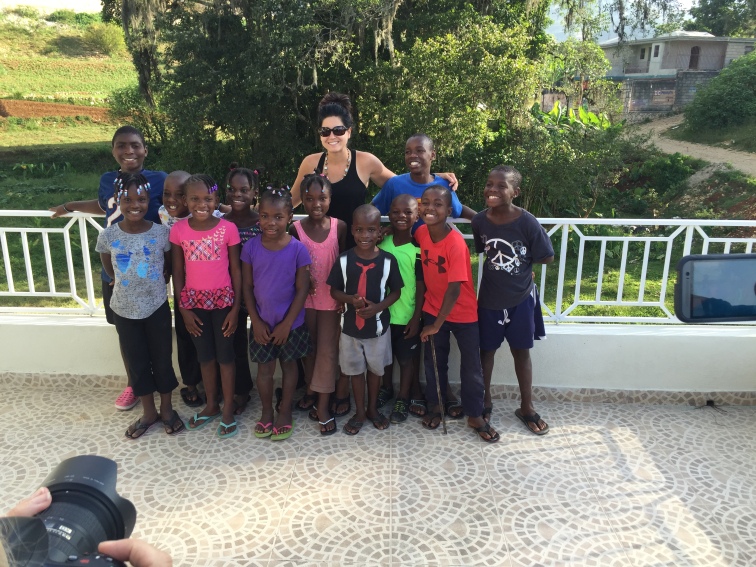 A young boy in a superman t-shirt ran up to me and nearly knocked me over with a huge hug. His face was full of joy as he grabbed my hand and said;  “We are going to see my new house! I’ll be living there when I turn 14 on my golden birthday and we’ll have a Christmas tree!” He then grabbed my hand and held it for the entire walk (how many 13 year old boys want to hold hands with a 52 year old woman they’ve never met before?). He spoke in English with a beautiful Creole accent and his intelligence was obvious. We talked about sports, movies, pizza, etc. and he asked me to see pictures of my family and was fascinated by my two dogs. When we got to the house, he showed me the bedroom he would be sharing with two other boys. All the children were running around the house showing us different rooms, the back yard, the garage, the kitchen. When we walked back to the orphanage, he continued to talk about his future, his hopefulness and joy never leaving him. I held and played with many of the children throughout the week and felt connections with many of them, but this boy (I can post pictures but not his name) will forever remain in my heart because of his sheer joy and resilience. I wish I could tell you his name (it’s in the Bible and it’s extremely fitting;))

These are just a few of the moments we experienced during out week in Haiti. We also made S’mores with the older kids, ventured into Petionville (where I nearly passed out from the heat), went to Church at the orphanage, ate many meals with the orphanage staff, had many wonderful conversations on the patio of the guest house. I even taught a yoga class or two to the ladies.

During our trip home which included two flights, a layover in Miami, a bus ride from O’Hare to Champaign (which included several round of “Heads Up”) and tearful good-byes and hugs in the parking lot of the Walgreens where we were picked up by our family, we all realized that this week had changed us in different ways. Some of us will probably never go back to Haiti and some are already making plans for extended trips. Our lives back here in the U.S. will go on and we’ll remember bits and pieces and will probably see some things differently from now on (never underestimate the luxury of a long hot shower) and will always have a little bit of Haiti in our hearts.

I know that these types of trips are not for everyone. I know that there are many ways we can all make a difference in the world. Just as I knew I was not meant to adopt or do long term mission work, I realize that not everyone needs to take these types of trips. This was something I wanted to do and felt right about doing. I needed it for my own growth as much as Haiti needs volunteers. In fact, I may have gotten more out of this trip than I contributed. There are many types of poverty and poverty of spirit is one that many of us don’t even realize we have.

If you’d like to learn more about GLA Haiti and find out ways you can help these beautiful children, visit www.glahaiti.org

We can all do great things.